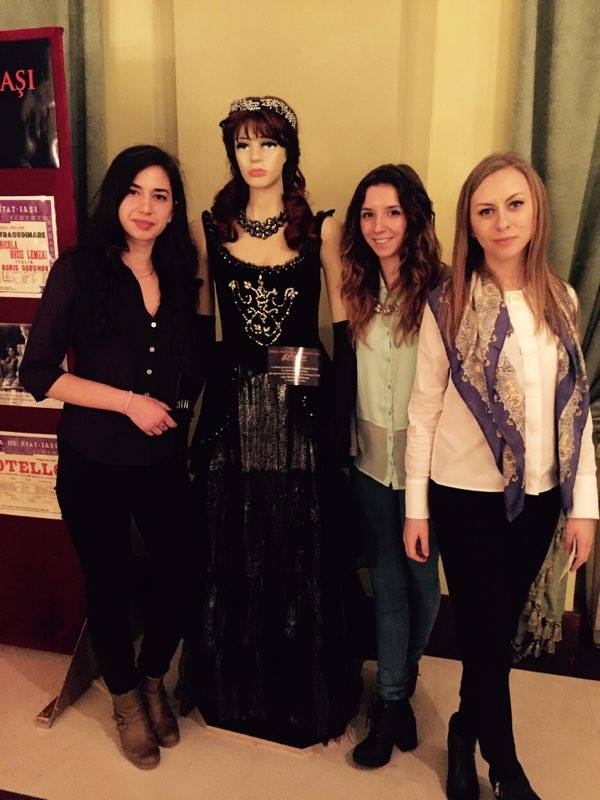 It is a cold Thursday evening, embraced by the welcoming warmth of “Vasile Alecsandri” National Theatre, which seems derived from a painting and placed near the “Stefan cel Mare” (Stephan the Great), a street for pedestrians which is also decorated with lots of little, colorful lights. Such an evening we have spent, along with other people who were holding their breath for one of the great theatre representations of “The Visit”, by Friedrich Dürrenmatt, a Swiss writer who has brought to the fore in his literary work the problematic of justice and endurance.

A merry smile welcomed us at the entrance! It was the bright face of the lady who was in charge with checking our tickets. I was rejoicing over the beauty that slowly surrounded me, taking me away from reality. A few minutes after, we were all sitting impatiently, awaiting the show to begin.

The lights had started to die, and an incontrollable, but sweet emotion took over me. A deep silence had covered the whole audience hall. On the stage a row of people represented the citizens of the German town of Gullen that had been facing serious financial issues, which were getting bigger. Very soon, the old lady Claire Zachanassian, a billionaire who grew up in this town, living a simple life, returned to her birth place. The inhabitants of Gullen put their deepest hopes in the old lady, thinking that she had returned to help them get rid of poverty. What they did not know was that she, in fact, came to take vengeance for the injustice she had suffered here in the past and that affected her whole life. The young Claire had been forced to leave the town all by herself and helpless, heading to a world totally unknown and dangerous. By marrying the billionaire Zachanassian, she became rich too. Now, coming back to her hometown, she offers a deal to the inhabitants, proposing them an extravagant amount of money in exchange for Alfred’s life. The people rejected the offer at first. But with the passing of time, getting used with the life full of conveniences they had started to live, getting full of debts, they decided to accept the pact proposed by Claire. When the horrendous deed is finally done, the people of Gullen remain with a burdened conscience and with lots of questions.

After a genuine life lesson we took part in that evening, the lights were lit in the audience hall, guiding our way towards reality again. We stood to applause the actors in endless waves of gratitude for the exceptional interpretation they allowed us to witness. It was remarkable! We took off happy and decided to change some of the values that are present in our lives every day.